Azhar chronicles the life and times of the well known and highly talked former Indian cricket Captain, Mohammad Azharuddin.  The first half tries to whitewash Azhar’s character, but twist near the interval tells us this is not the case. 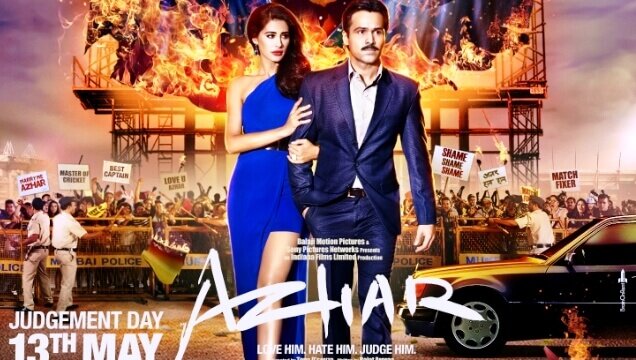 You stay invested here because the material at hand combines India’s two religions-cricket and films. The movie is directed by Tony D’Souza and produced by Shobha Kapoor, Ekta Kapoor under the banner of Sony Pictures Networks. Azhar was an idol in the 80-90s. The film traces the rise of a prodigy born into a modest Muslim household in Hyderabad. As early as his 20s, he goes on to become one of the most accomplished Indian batsman and a paisa-vasool fielder.

A disclaimer sets in the beginning reminding that this movie is purely based on his achievements and not a biopic. Touching on Azhar’s blazing test journey prophesied by his maternal grandfather (Kulbhushan Kharbanda), who tells him that he should invest in the flick of the wrist, not futile conversations. After his grandfather’s death his urges to fulfill his wish of 100 matches. One-liners undoubtedly are impactful.  Tere ko jawab bolke nahi, khel ke dena. Tu Muh se bolega toh kuch hi log sunenge, balla bolega, toh poori duniya ko sun na padenga’, Sau sahi kaam kar lo koi yaad nahi rakhta, ek galat ilzaam aur sabne bhula diya’, These  dialogues  definitely make you want to see how the movie explores Azhar’s journey. We are shown how the Muslim boy with `Mohammad’ in his name, becomes an overnight rage after he slams back-to-back centuries. It is interesting to see how cricketers like Ravi (Gautam), Manoj (Karanvir) and Navjot (Manjot) who patronize him initially, later resent his rise as the Indian captain. The trappings of fame also affect his personal life. He strays from his arranged marriage to Naureen(Prachi) to an extra-marital affair with a Bollywood actress, Sangeeta(Nargis). And if that is not all, his career is threatened by a match-fixing allegation that forces him to take legal recourse.

His desire to play a hundred tests remains a pipe dream because he is banned after his 99th nine. . He takes the help of his friend cum lawyer, played by Kunaal Roy Kapur for the legal recourse.  However, the prosecution is led by the firebrand lawyer, played by Lara Dutta, who is determined to show the world the real face of Azhar. Without giving away too much, here one must add that the court-room drama with Reddy (Kunal) defending him and Meera (Lara) against him, is partly banal, partly an eye-opener. However his mannerisms—the blinking of his eyes and swagger add to a knockout performance.

Hashmi potrays Azhar with enough sincerity that we don’t mind that he doesn’t look anything like the former cricket captain. His mannerisms are near identical to what we have seen of the man he is playing in the film. His romantic sequences with his first wife, played by Prachi Desai, are very heartwarming. Kunaal Roy Kapur, Gautam Gulati and Lara Dutta also pitch in fine performances. However, the makers’ deliberate intention to give a filmy touch to the proceedings  do hamper your viewing pleasures, especially a few clichéd scenes and corny dialogues.

It is a winning start for Azhar as Rashmi Virag writes some good lyrics for ‘Bol Do Na Zara’. Daubed  in romance,  Armaan Malik  as the singer takes the credits. to do the honours behind the mike. The song is a slow, melodious number that is bound to stay with you for long, and will appease any Emraan Hashmi fans.

With Guest composer Pritam roping in Arijit Singh and Antara Mitra in Itni Si Baat Hain is livelier, but the impact of the song is not as much as Bol Do Na Zara.

‘Oye Oye’ (Gazar Ne Kiya Hai Ishaara) is brought in a new age avtar by DJ Chetas. Reason for its popularity being its  funky arrangements of the original song.

The soundtrack concludes with ‘Jeetne Ke Liye’, which is set to be a motivational number that is expected to play during the narrative once the character of Azhar is shown to be battling allegations of match fixing. This one has the singer crooning in trademark high pitching.

When it comes to an album for an Emraan Hashmi film, Azhar won’t let you down. The songs can be heard on a repetitive note.

Azhar has definitely acquired tremendous response among the fans and cricket lovers.  The tagline of the movie is “Love him, Hate him, Judge him” which accurately speaks about the legendary cricketer Azharuddin. This one deserves a blockbuster innings!