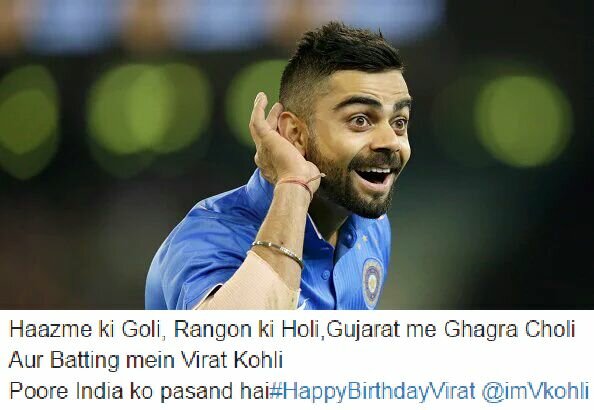 Indian test skipper and one of the best batsman in the world Virat Kohli is celebrating his 28th birthday today. since Saturday morning. Hashtag “#HappBirthdayVirat” is trending on the social media platforms which shows the kind of fan following he has in the country.

Kohli, in his career for India, has earned 48 Test and 176 ODI caps and, in 2014, he was appointed as India’s captain in the longest format of the game after MS Dhoni’s retirement. Kohli is one of the few players to have found success in all three formats of the game and has scored Test, ODI and T20 centuries in his glittering career.

From his professional life to his personal life, everything just gets attention and turns into talk of the town.  So how can his birthday not get the same?  So here is how other celebrities are wishing him.

Let’s start with the twitter ninja Virendra Sehwag who as always wished Virat in his unique parody style . He wrote “8 yrs ago we cud have dedicated this day by eating Chikoo. But tday,I think all auto/taxis shud start their Meter frm100.”

Then comes the turn of Indian coach Anil Kumble. He wished him writing  “Happy birthday @imVkohli. Hope you have a fantastic year ahead. Wish you the best of everything.”

Former South African fielder and Mumbai indian’s fielding coach Jonty Rhodes also wished the Indian skipper  happy birthday writing “Tough job being @BCCI skipper @imVkohli on my 7am flight out of Delhi – which means he was also up at 4:30am”

This Picture of Ronaldo is Disappointing His Fans
Loading...