A single man named Adolf Hitler 77 years ago started the biggest and Deadliest Conflict In Mankind’s History, World War 2 just by his country Germany attacking Poland Over 7,30,00,000 people lost their lives. Soldier’s martyred, innocent civilians dead and countless cities damaged to an almost unrecoverable state. And today still after 77 years its consequences can be witnessed.

# The man who started it all – Adolf Hitler – with the Nazi salute to his troops.

# President Franklin Roosevelt signs a declaration of war against Japan on 8th December, 1941.

# Hungry french civlians take what they can from a dead cow slaughtered by the Allied troops during Normandy Invasion.

#This dead German soldier was one of the “last stand” defenders of German-held Cherbourg. Capt. Earl Topley, who led one of the first outfits into the fallen city, blamed him for killing three of his boys. France, June 27, 1944.

#These Russian, Polish, and Dutch slave laborers interned at the Buchenwald concentration camp averaged 160 pounds each prior to entering camp 11 months ago. Their average weight is now 70 pounds. Germany, April 16, 1945.

#This victim of Nazi inhumanity still rests in the position in which he died, attempting to rise and escape his horrible death. He was one of 150 prisoners savagely burned to death by Nazi SS troops.

# A truck load of bodies of prisoners of the Nazis, in the Buchenwald concentration camp at Weimar, Germany. The bodies were about to be disposed of by burning when the camp was captured by troops of the 3rd U.S. Army. April 14, 1945.

#Bones of anti-Nazi German women still are in the crematoriums in the German concentration camp at Weimar, Germany, taken by the 3rd U.S. Army. Prisoners of all nationalities were tortured and killed. April 14, 1945

# This terrified baby was almost the only human being left alive in Shanghai’s South Station after brutal Japanese bombing. China, August 28, 1937.

#Casualties of a mass panic; during Japanese air raid, 4,000 people were trampled or suffocated to death trying to return to shelters. Chungking, China, June 5, 1941.

#This girl pays the penalty for having had personal relations with the Germans. Here, in the Montelimar area, France, French civilians shave her head as punishment. August 20, 1944.

#This boy’s dead body, aflame, bears ghastly witness of the horror of the damage done by V-2 on main intersection in Antwerp on main supply line to Holland. Belgium, ca. November 27, 1944.

#The last photo of Adolf Hitler as he overlooks the damage in Berlin.

# British Trooper W. Williamson does his good deed for the day by rescuing a puppy dog from the ruins of a shelled German house on the outskirts of Geilenkirchen.

#Japanese prisoners of war are bathed, clipped, “deloused,” and issued GI clothing as soon as they are taken aboard the USS NEW JERSEY. Prisoner bathing. December 1944.

#The bombing of Nagasaki on 6th August, 1945 that killed over 1,20,000 people and left countless others affected for decades after that.

#New York City celebrating the surrender of Japan. They threw anything and kissed anybody in Times Square. August 14, 1945.

#The Mona Lisa is returned to the Louvre from hiding when WWII ends. 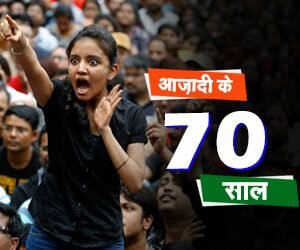