A date with Qutub Minar

I have read a lot about this long tall red minaret in my history books but it was totally different experience when I actually saw and touched the Qutub Minar. You know reading and actually seeing these historical monuments are two different things. Walking down the memory lane I was actually flipping my history books.

It was February when I visited this admirer’s bliss. Winter was all ready to say good bye and summer was started making its place in Delhi.

Walking through the foyer of the remnants of the first city of Delhi, this towering Qutub Minar stood tall in middle like it had been for last 800 years. Minar looked lovely with its lush green lawns and monuments scattered all over. Easily accessible from the Qutub Minar Metro Station, this piece of architecture is distinct from the rest of the monuments existing in Delhi.

Oh do you know what Qutub Minar means? It means ‘pole’ or ‘axis’ in Arabic. The construction of Qutub Minar was commissioned by Qutub-ud-Din Aibak, the founder of the Delhi Sultanate in 1199 AD. The minar was built on the ruins of the Lal Kot, the Red Citadel in the city of Dhillika. 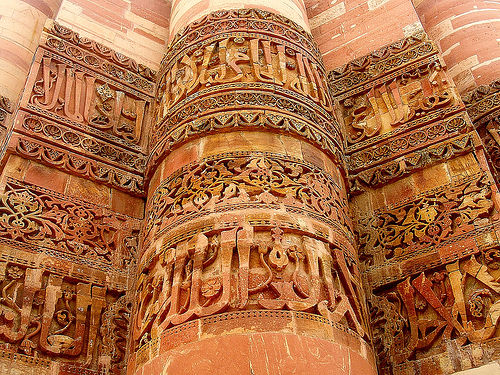 72 meters in height with 379 steps leading to the top and have five stories, each with a balcony. The entire five storeys’ of Qutab Minar consists of Koranic inscriptions. Each storey is marked by a balcony. The first three storeys’ are made of red sandstone, while the fourth and fifth are of marble sandstones. But you cannot see them as people are not allowed to enter inside due to security reasons.

The architectural style of the “minar” has both Hindu and Islamic elements. The “minar” is circled with decorative motifs at each storey giving a distinctive flavour. The exquisite calligraphy all over the “minar” is comparable to none. It was much more than just a sign of victory or watch tower. It was an infusion of Indo-Islamic-Afghani cultures and a mark of perfection. Although it was commenced by Qutub-ud-din- Aibak and was completed by Iltumish but it has always adapted to the changes. The two storeys in white marble were added by Firoz Shah Tuglaq after it was damaged by lightning.

Thereafter, also it has been subject to many alterations.

In 1505, an earthquake damaged Qutb Minar and the damage was repaired by Sikander Lodi. On 1 August 1903, a major earthquake again caused serious damage to Qutb Minar. Major Robert Smith of the British Indian Army renovated the tower in 1928 and installed a cupola to the top of Qutb Minar. The cupola was later taken down under instructions from Lord Haringe, then Governor General of Pakistan and was installed to the east of Qutab Minar, where it rests now.

The Qutub Minar and its monuments are listed in UNESCO World Heritage Site.

Exploring my historical tour further I came to the renowned Iron Pillar. It’s a simple 7m tall pillar with some inscriptions in Sanskrit, Urdu, Arabic etc. The pillar has attracted the attention of archaeologists and materials scientists and has been called “a testament to the skill of ancient Indian blacksmiths” because of its high resistance to corrosion, which serves to protect it from the effects of the local Delhi climate.

The pillar carries a number of inscriptions and graffiti of different dates which have not been studied systematically despite the pillar’s prominent location and easy access.

Oh but before taking exit do visit one of the most elegant tomb in Delhi. Built by Iltutmish himself a year before his death, in around 1235. It is first Islamic tomb in India.

While from the outside the structure looks like a plain square box made of stone, the tomb is surprisingly ornate with delicate stonework on the inside. Beautifully carved Quranic inscriptions are used as ornamentation along with arabesque and floral motifs covering entire walls.

There are no inscriptions on the tomb which credit it to Iltutmish, leading to doubts about the tomb’s identity. However, records and writings of contemporary and subsequent historians have confirmed that the tomb does indeed belong to Iltutmish.

Summer holidays are near so you can plan this year trip to Delhi and explore the history. For once you can believe that this boring subject still has a lot to be heard.